A new California law threatens to upend Uber, but the Washington Post claimed the law doesn’t apply to the ride-hailing giant. This is convenient, since Post owner Jeff Bezos is not only a major Uber investor, but also founder and CEO of Amazon, which is likely to also be negatively impacted by the new law.

The recently passed legislation requires companies to classify workers as employees if their work is central to the business. Throughout its decade of lawbreaking and staggering growth, Uber has classified its drivers as independent contractors, not employees. This has allowed the ride-hailing giant to avoid providing benefits and job protections, creating huge savings for Uber and financial hardship for many drivers. 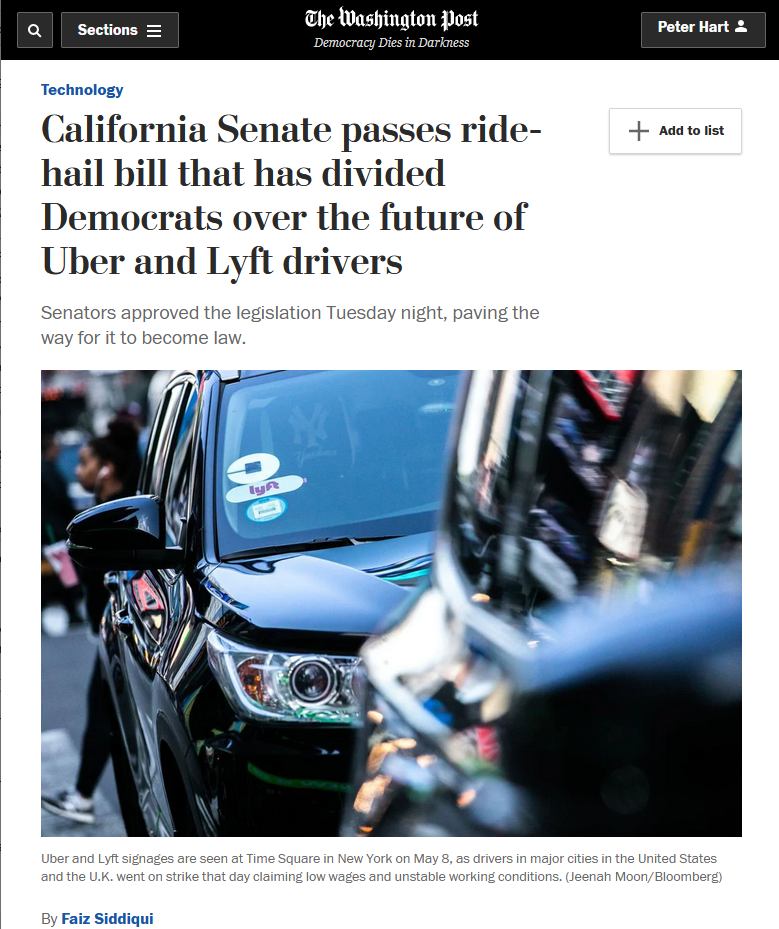 The same language that the Washington Post print edition presented as legal fact appeared in an online version of the story (9/11/19) as Uber’s lawyer’s opinion.

The law compels companies to prove that contractors are performing work that is outside the core function of the business. Uber can meet that standard because it’s a technology platform for several types of marketplaces, though legal challenges are likely.

That’s what appeared in the print version of the Post. The online version of the story (9/11/19) offers a similar legal opinion, only now attributed to Uber general counsel Tony West (who declared that Uber would defy California’s law):

The law, [West] said, compels companies to prove that contractors are performing work that is outside the core function of the business. Uber, he said, can meet that standard because it’s a technology platform for several types of marketplaces, though he expects legal challenges going forward.

Other news outlets appear less confident than the Post and Uber that the ride-hailing giant will prevail in court. (Elsewhere, the Post—9/17/19—was also skeptical that Uber would prevail.)

Uber’s central argument is that drivers aren’t performing a core function, because Uber is a tech platform, not a cab company. But it “could be hard for Uber to make such an argument” (Bloomberg, 4/11/19), since this is “a hard-to-believe sleight of hand” (American Prospect, 9/12/19), which is why the company is “unlikely to win” in court (New York Times, 9/12/19).

On Twitter (9/12/19), New York Times reporter Noam Scheiber pointed out that Uber didn’t fare well when making this argument before a New York judge in 2017.

So, to recap: Yesterday Uber said it wouldn’t reclassify drivers as employees under California’s new law b/c it doesn’t believe drivers are part of its “usual course of business.” Here’s how that argument played when Uber tried it before a judge in NY in 2017. pic.twitter.com/dJQFrl3se9

Post columnist Megan McArdle (9/13/19) isn’t optimistic about Uber’s chances in court, nor is she happy about California’s new law, which she blames on lefties and predicts will lead to mass job losses. Also, McArdle says, it’s unfair to ask more of Uber and Lyft:

Yes, you in the back, wearing the Che Guevara T-shirt, I can hear you muttering about how they could “just take a little less in profits.” That might be fine for older companies that make heavy use of contractors and have old-fashioned things such as profits. But the gig-economy companies are still hemorrhaging cash.

Uber and Lyft are indeed hemorrhaging cash, even as they make their investors, including McArdle’s boss, unbelievably rich. 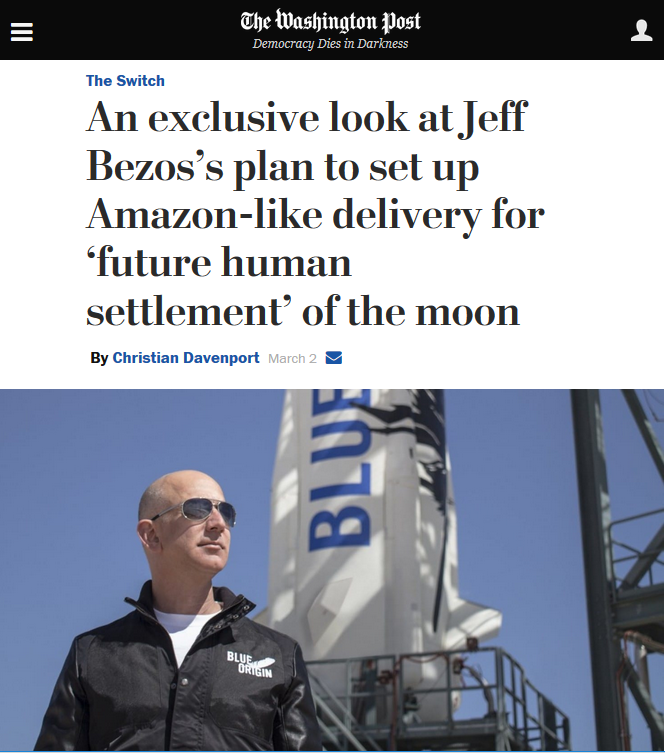 It’s not true to say that the Washington Post (3/2/17) is never interested in its owner’s other business activities.

Returning to Post reporter Siddiqui’s Uber-friendly legal opinion, which he later (accurately) attributed to Uber: This may have been an innocent mistake (albeit one the Post has yet to acknowledge, as no correction has been posted), but it looks less innocent when considering Bezos’ ties to Uber.

On top of that, Uber co-founder and former CEO Travis Kalanick—who remains on Uber’s board and is one of the company’s largest shareholders—is a Bezos fanboy. As CEO, Kalanick worked with a Bezos disciple to create 14 corporate principles for Uber, mimicking Amazon’s 14; although Kalanick’s list, which had “Always Be Hustlin’” at the top, read like it was “run through a bro-speak translation engine,” Mike Isaac writes in Super Pumped: The Battle for Uber.

The love flowed both ways, as Bezos praised his mentee’s brash style. “Travis is a real entrepreneur,” Bezos said of Kalanick, according to Brad Stone’s The Upstarts: How Uber, AirBNB and the Killer Companies of the New Silicon Valley Are Changing the World.

Bezos’ and Kalanick’s companies share a lot in common, as both are known to bully competitors, cheat the government, mistreat workers and, crucially, rely on large numbers of independent contractors.

“By some estimates, nearly half of Amazon‘s packages in the US are now delivered” via third party vendors, according to a year-long BuzzFeed investigation (8/31/19). These vendors in turn hire drivers, appearing to place distance between them and Amazon, even though Amazon “dictates almost every aspect of that operation, down to what drivers wear, what vans they use, what routes they follow, and how many packages they must deliver each day.”

With California’s new law taking hold, and other states looking to follow suit, Bezos could end up the biggest loser if his holdings in Amazon and Uber take a hit.

The Post’s recent pro-Uber reporting is not an anomaly, but part of a pattern at the paper (HuffPost, 6/21/16), which no longer bothers to inform readers of Bezos’ ties to the ride-hailing company.

“Conflicts this basic—as in, our boss stands to make a substantial fortune from the success of this company—typically require disclosure, if only to fend off the appearance of impropriety,” noted Adam Johnson (FAIR.org, 11/10/15). 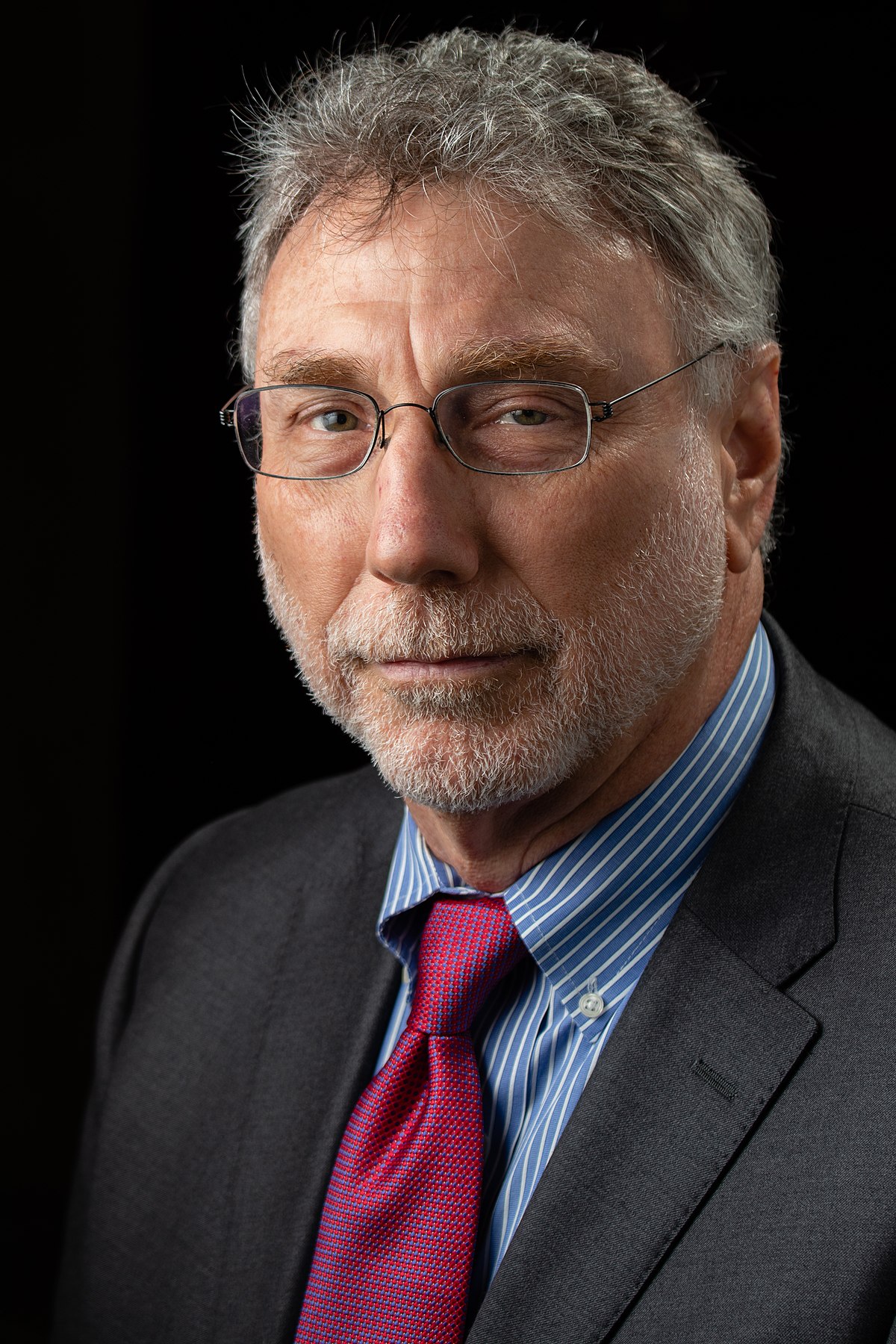 Washington Post executive editor Martin Baron on his boss’s $0.4 billion stake in Uber: “I have no idea if he remains an investor.”

Post executive editor Marty Baron wrote to me in a 2016 email: “We have frequently identified him [Bezos] as an investor” in Uber—even though, he added, it’s unnecessary to do so since Bezos is a passive rather than active investor.

But in 2017, as Uber hit turbulent waters, the Post stopped disclosing Bezos’ ties to the ride-hailing giant (Washington City Paper, 7/18/17). I followed up with Baron. “No,” there had been no change in policy, he wrote. “We knew he was an early investor. I have no idea if he remains an investor.”

This is strange coming from Baron, whose investigative prowess was heralded in the movie Spotlight. Apparently when it comes to his boss, Baron prefers to play dumb.

Even if Baron is reluctant to ask Bezos about his investment in Uber, he can still read about it in any number of media reports, and even find a passing mention of it in a Post story in April (4/4/19). But by maintaining a façade of ignorance, the Post evades having to disclose to readers about its owner’s ties to Uber.

Independent of Baron’s let-there-be-darkness edict, it’s understandable that Post reporters might ease up on companies closely tied to the guy cutting their checks. “I would say that I tend to do less critical thinking about Amazon than I do, say, about Facebook or Google or Walmart,” an anonymous Post employee told HuffPost (12/4/18). “The reason is fairly obvious: because I am thankful for the opportunity I have, which wouldn’t exist without [Jeff] Bezos.”

Threatening Amazon as well as possibly being an “existential threat” to Uber (American Prospect, 9/12/19), California’s new law poses a potential two-fold hit to Bezos’ holdings. In light of this, it’d be surprising if Bezos’ newspaper didn’t take a skeptical view of the law.

Messages can be sent to the Washington Post at letters@washpost.com, or via Twitter @washingtonpost. Please remember that respectful communication is the most effective. Feel free to leave a copy of your message in the comments thread of this post.